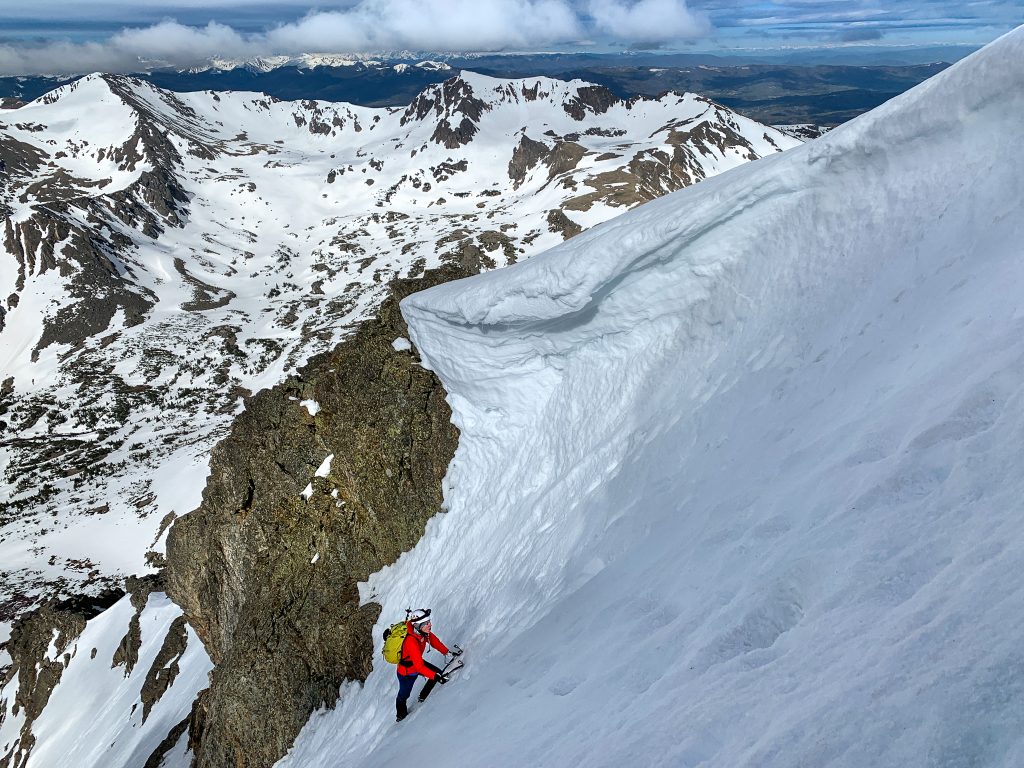 With an epic snow year, we geared up to climb the Skywalker Couloir. Little did I know the day would offer up a little more adventure than I bargained for.

This in-depth Skywalker Couloir trip report is designed to give you the in-depth knowledge you need to climb the Skywalker Couloir via the Princess Leah finish. I’ve peppered in a few good stories from our adventurous climb, including an un-expected self-arrest.

About this Guide to the Skywalker Couloir in Colorado

As a Colorado local of over 12 years, I’ve been up a peak or two. In fact, mountaineering and snow climbing is one of my favorite past-times. In this guide you’ll find:

Located about two miles up the Fourth of July Trailhead, off of the Fourth of July Mine trail, South Arapaho Peak sits 13,397 feet above sea level. From the base of the Skywalker couloir, the summit looks squat and rounded compared to the nearby Mount Neva and surrounding peaks.

However, don’t be fooled, the Skywalker Couloir covers the majority of the peak and looks like an imposing, steep snow romp from the base. With nearly 2,000 feet of steep snow, this couloir demands respect. It’s long, steep, exposed, and icy. Only intermediate to advanced snow climbers should attempt this route.

About the Skywalker Couloir Route

One of my favorite things about the Skywalker Couloir is its varied finishes. On this classic Colorado snow climb, you can opt for an easy out toward the left-hand side (the couloir reaches a max angle of 60 degrees along this route), a 4th class finish via the right side Han Solo route. Some groups opt to bring rock protection and a rope, simply because you’ll be climbing in mountaineering boots.

And lastly, the toughest route, the Princess Leia finish that reaches angles of 65-plus degrees. Depending on the season, this finish can be an ice route, requiring screws and a slabby lead on ice.

The couloir dumps you a few hundred feet from the summit of South Arapaho, and unless you descend the couloir via skis, you’re forced to summit the peak for a six-mile round trip journey of 3,200+ feet of gain. It’s a burly day.

Looking to climb or sky the Skywalker Couloir on South Arapaho Peak? Here are a few quick facts to help with your planning.

About the 4th of July Trailhead

You get to the trail for the Skywalker Couloir via the 4th of July Trailhead. To access the trailhead, travel past Nederland and Eldora until you reach a dirt road. Continue past the Hessie Trailhead, down a dirt road that turns into a rutted out mess. You’ll want high clearance or at least an all-wheel drive vehicle to continue.

The trailhead has limited parking, with plenty of no parking signs scattered along the road. There’s a few sparse campsites and pit toilets. Check out the complete guide to the 4th of July Trailhead (coming soon) for more info.

Now for the juicy part. Here’s a look at an in-depth Skywalker Couloir trip report. When we did this climb, we had an unseasonably high snowpack and absolutely killer conditions.

Early Bird Gets the Sunrise

We climbed the Skywalker Couloir in early June, as recommended by a few friends who have done the climb in prior years. In order to get the best snow, we started at the trailhead around 4:30 in the morning.

Typically at this time of year, the approach trail wouldn’t be holding a ton of snow, but with the epic snow year, almost all of the trail was a combination of snow, ice, and tons of flowing water. At one point, we straight up crossed a waterfall. Certainly, a precarious crossing, considering the rocks were slick with ice.

The sun rose in the breath-taking valley, lighting up the peaks to the northwest. I stopped and took in the unmatched beauty of the scenery surrounding me. John was anxious to get to the base of the climb, and it was cold and breezy, so we hustled.

Gearing Up for the Climb

Once at the base, the climb surprisingly didn’t look all that foreboding. I’ve stood in front of plenty of these snow climbs over the years, it didn’t appear to be too grueling looking up. But the wind was barreling down the Skywalker Couloir at a constant rate, and I knew it would be one of the chillier ascents since the route doesn’t see the sun until later in the morning (around 9 am).

We stopped for some shelter behind a rock and ditched our snowshoes. As we popped our crampons on and got ready, I wondered which finish we were going to top out on. We decided not to bring ropes (I was feeling lazy), but we had one axe and one tool to handle the steeper terrain. We decided to scope out the various finishes and make the call in the couloir since we weren’t sure what the snow would be like.

Climbing the Skywalker Couloir via the Princess Leia Finish

We started up the Skywalker Couloir around 6 am and the conditions were absolutely perfect. The climb starts slightly mellow and quickly steepens at the top of the apron.

Once inside the couloir, the steepness gets up into the 40-plus degree range rather quickly. We practiced for a few steps with our axe and tool setup, to make sure we felt secure and remembered how to properly execute this technique.

After the second squeeze near the Han Solo exit, Skywalker steepens substantially, going at least 60-degrees for the remainder of the climb. This was almost two-thirds up the couloir. Be prepared for a mega calf burn and some sore arms.

I oscillated between French and German techniques, relying heavily on stellar purchases with my tools. The snow had an icy crust and underneath had sticky snow that gripped at my metal points ferociously.

We felt strong and decided to go for the tougher Leia finish. Topping out on the steep snow was pure magic. Despite my exhaustion (I was a tad out of shape for this one), I loved the feeling of flying high on the steep snow.

After topping out 2 hours later, we collapsed in a heap, starving and in need of some quick sugar. John and I snacked on some salty crackers and sour gummy worms. The wind picked up and we got our hustle on.

We reached the summit with relative ease compared to where we had just crawled (literally) out of. My knees felt super-tight and I worried about the descent.

Summits have never been a special experience for me (with the exception of topping out on the Grand Teton). It’s always the climb that allured me. The summit of South Arapaho Peak felt like every other class 2 summit in the Colorado Rockies. Lumpy and dull compared to the climb. The clouds moved in and out, creating an eerie atmosphere that we welcomed after crystal clear views all morning.

By the time we hit the summit and started descending down towards our gear stash, my knees began to shudder with pain. The class 2 boulder hoping annoyed me more than anything. We tried to stick toward the descent route along the Arapaho Glacier Trail, but it sped off in the opposite direction of our gear and we didn’t want to backtrack.

Instead, we decided to head down the boulder field. As my knees screamed in revolt, we headed towards a snowfield, hoping to glissade and save some energy.

When we arrived, the snow looked steep. I’d glissaded steep snow before (after climbing the technical route on the Citadel via Snoopy’s Backside Couloir). It wasn’t a pleasant experience, but the snow was punchy and it was easy-ish to maintain control. Since the snow had been baking in the sun, I thought it was soft enough.

Wow was I wrong! I got going and it was nearly impossible to stop. I rolled over, self-arrested, and cursed the hard-packed snow. By this point, my arms felt utterly spent. My body needed a substantial break and this was not the place to get it.

The Terror of Self-Arresting

I had a choice, I could attempt to put my crampons back on for 50 yards, then take them off, but it was really steep and I feared I might trip in the process. 100 feet below me, was the large pile of motorcycle-sized boulders looking menacing and mean.

I held my breath as I got going again. Before I could think I was sliding out of control, hurtling towards the huge boulder field. I envisioned my body slamming into the rock and whipping about like a rag doll.

Terrified, I froze and let out a guttural scream as I wildly slid towards the rocks. Somehow, I managed to unfreeze myself and roll over. I hesitated to grab my axe (I’ve been scared of self-arresting after a scar-giving accident), as I hurled towards my doom. My survival instincts kicked into gear and dug in, slowing down and coming to a stop just 15 feet before the rock pile.

In a huge sigh of relief, I cried as an onlooking marmot stared at the hot mess that was my body. What a morning for Mr. Marmot.

We made it down the rest of the way without much incident. As we descended, we continued to hit patches of snow, requiring me to either suck it up and face my now-traumatized glissade game or endure huge, bouldery, walkarounds (I chose the former option).

We rounded out our trip back at the car by 11:30. Exhausted, smiling, and satisfied.

The Skywalker Couloir is a classic Colorado snow climb for a reason. It’s steep, beautiful, and beckons to be climbed.