Many of us strive to stand on a mountain top. Despite the immense physical effort, grueling challenges, harsh conditions and expensive gear there are a few of us who simply can’t get enough of the alpine. Here in the US, we have a fantastic array of mountains from the beginner hill walk to month-long technical climbs. Here’s a look at the best mountain climbs in the US and what it takes to reach the top.

By Allison at She Dreams of Alpine

Many people travel all over the United States to climb Mount Whitney in California, the tallest peak in the lower 48 states, and to stand on its summit towering 14,498’ high above the rugged Sierra Nevada Mountain Range. However, most people only get to experience this mountain via it’s class 1 hiking trail that practically leads all the way to the summit.

If you are up for the mountaineering challenge and extra excitement, then climbing Mount Whitney Via the Mountaineers Route should be high on your mountaineering bucket list! Most likely you will want to aim for 2-3 days to mountaineer this trail as there are over 28 total round trip miles to cross and over 8,400’ of elevation gain to ascend. The trail requires basic mountaineering skills, but there is no technical glacier travel involved, so feel free to leave the ropes behind on this one.

The hike in is long and, depending on the snow year, may require some good technical snowshoes to climb the steep slopes packed with fresh snow. The main “hikers” trail ascends left of the mountain, but the mountaineer’s route ascends a steep couloir on the right side of the peak. This peak is exciting and challenging, while still being a more moderate “beginners” mountaineering route, but the best part is the jaw-dropping snowy Sierra Nevada Mountain range views from its summit. 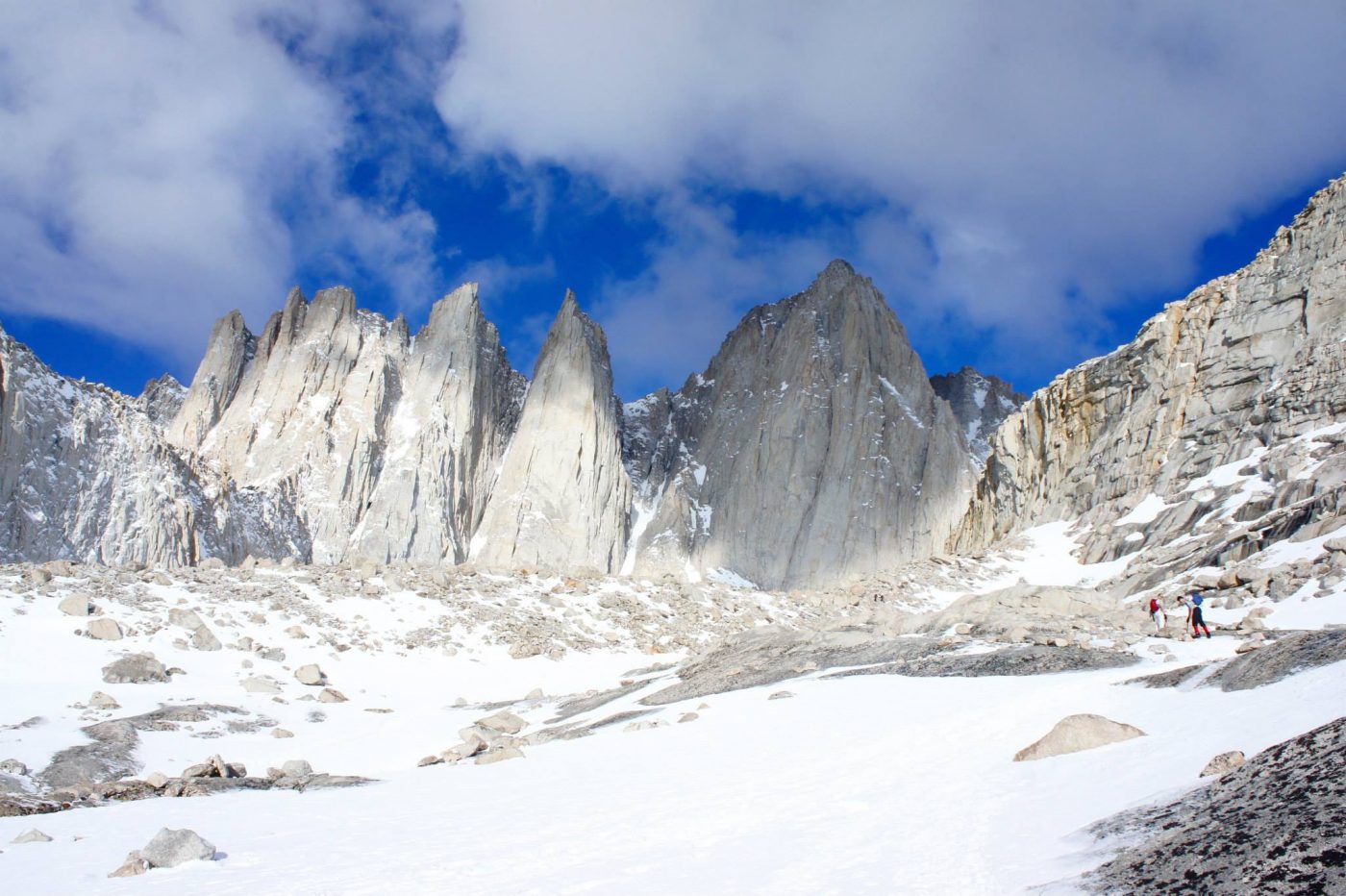 by Emma Longcope with the American Alpine Club

14,259-foot Longs Peak, the highest point in Rocky Mountain National Park, is not a secret. Many peaks seem to compete for the title of “crown of the Rockies”, but Longs sure makes a strong case for itself, buoyed by the infamous Diamond. This sheer face towers over 1,000-feet above the deep-turquoise of Chasm Lake, guarded by boulder-fields and steep snow, daring climbers to scale its sweeping granite.
To begin the Diamond, climbers often solo the chossy 5.4 North Chimney, perhaps three pitches, then reach Broadway Ledge, a grassy perch from which the pitches above appear to leer overhead, stretching and taunting. From here, classic route options are endless, from the easiest (still not easy) Casual Route (5.10, 7p) to test-pieces like The Honeymoon is Over (5.13c, 9p).

A Day on the Diamond

One weekday last September, my buddy proposed Pervertical Sanctuary (5.11a, 6p) in a car-to-car effort for my first excursion up the famed face. (Some climbers opt to stay a night amidst the boulder-field below). This was no simple day on the Diamond. As I began to climb, I felt stiff and chilled climbing, but found a rhythm, swapping leads at the start, basking in the movement and the sensation of insignificance amidst a deep sea of granite. Before I knew it, we were coming up on the intersection with Keiner’s Route, a fourth-class scramble that ascends the South side of the peak to my first Longs Peak summit.
Is the Diamond over-hyped? Maybe. Talking to older legends of climbing in the area, some seem to think the face is overplayed. But what qualifies a classic better than the continuous fodder for stories, memories, and dreams? In today’s world, I think we’d all benefit from continuing to dwell on the places that make us feel small, feel powerful, feel connected. Longs Peak is just one of those places.

by Angela of Angela Travels

Located in Washington state, Mount Rainier invites mountaineers to its glaciated slopes with several routes to choose from. The more popular and guided route is the Disappointment Cleaver (also known as the DC) includes Camp Muir and crosses the Ingraham Flats Glacier before reaching the summit. Climbers attempt the climb while acclimating over one to two nights and climbing two to three days. The 9,000 feet elevation gain makes the mountain quite the challenge. Late season, guides maintain the route with ladders for crevasse crossing.
Rainier is a technical mountain and requires glacier travel and crevasse navigation. The most sought-out routes include: DC, Emmons-Winthrop, Kautz Glacier and Liberty Ridge, Some routes even require technical ice climbing. Enter the lottery system or try your luck at a walk-up permit. Some attempt it many times before reaching the summit while others succeed on the first attempt. Weather becomes a factor and conditions vary from year to year. 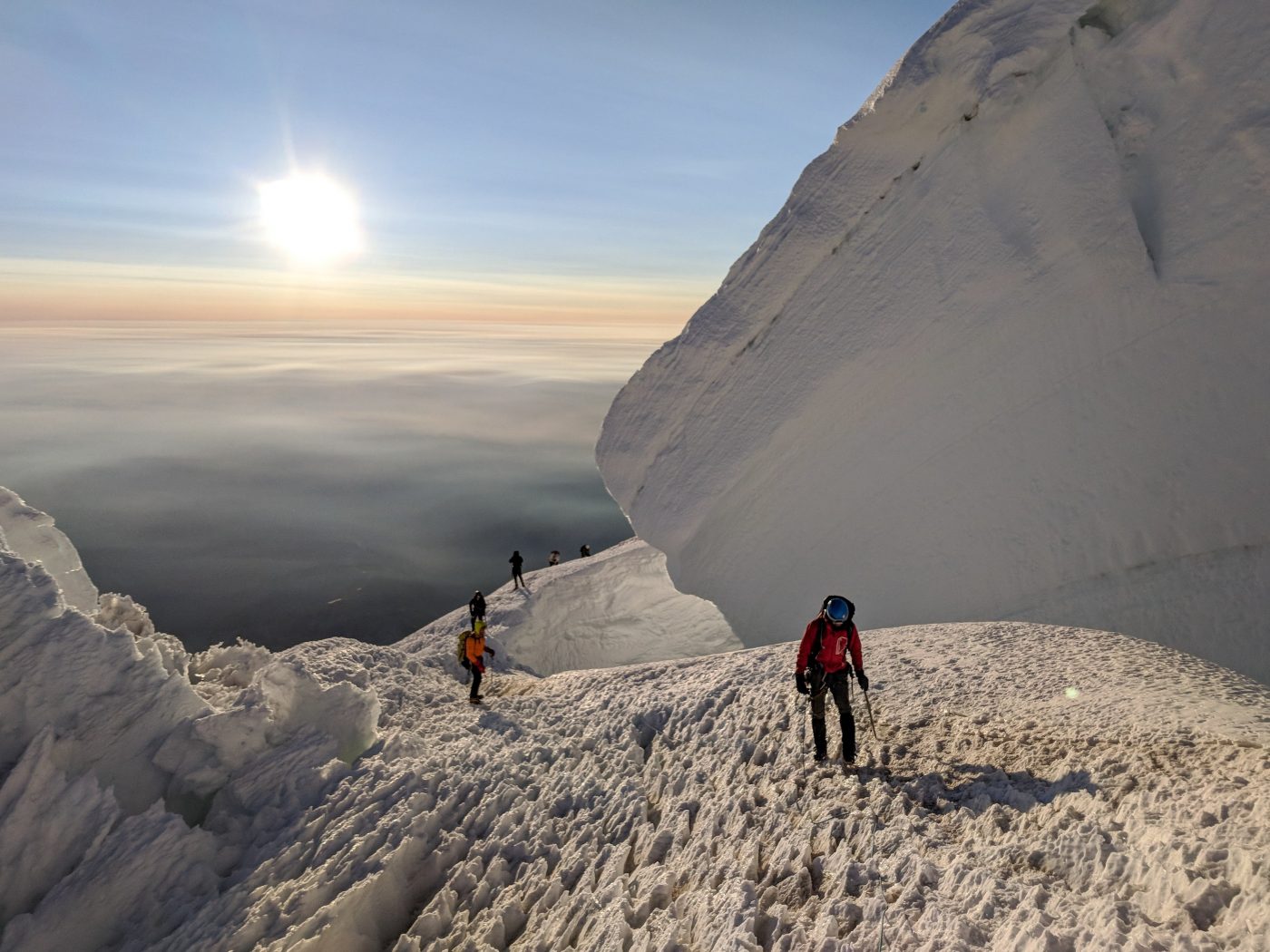 Located in Grand Teton National Park, the Grand Teton offers several technical climbing routes up its 13,775-foot peak. The easiest route up this classic American mountain is the Owen-Spaulding route (a 5.4). Most climbers take on one of the other classic lines, such as the Upper Exum Ridge, a multi-pitch climb (capping at 5.6) that offers some classic, high-adrenaline climbing. There are 30 routes on Mountain Project for this magnificent mountain varying from 5.4 all the way to a 5.12-.

Most mountaineers tackle this peak either in one long day or with an overnight along the saddle. In order to climb this alpine classic, you’ll need to enter a lottery for permits well in advance. Some walk-up permits may be available if you get lucky. The climb involves a seven-mile approach with around 4,000+ feet of gain until you reach the saddle. Once there, it’s another 1,000 – 1,500 feet of gain in just under a mile and a half before you reach the small summit of The Grand. On the descent, you can either downclimb the Owen-Spaulding or opt for a few rappels, one notable rappel is a 60m free hang that leaves you with breathtaking views of the valley below. 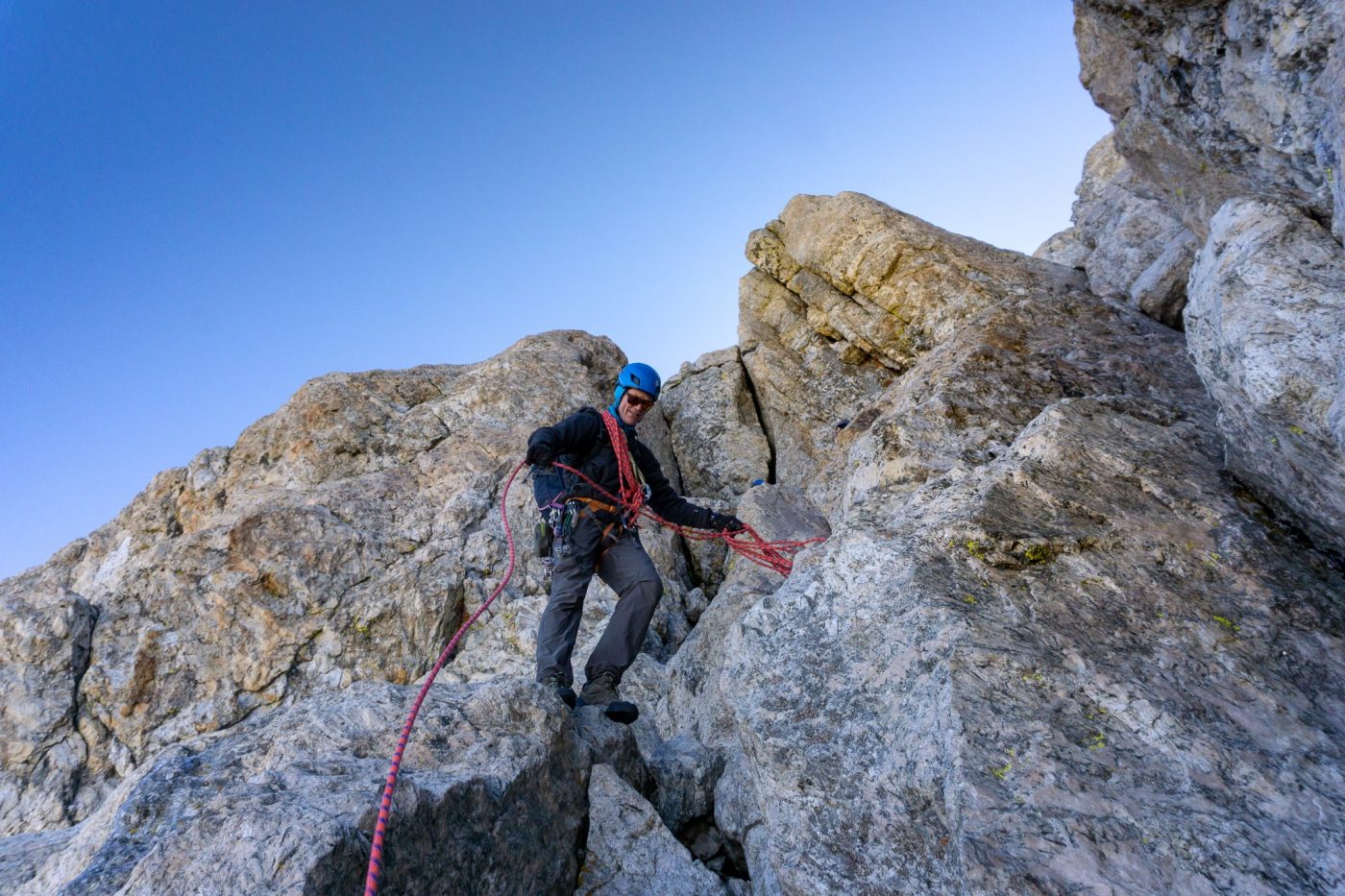 by Chris of The Bold Nomad

At Idaho’s highest point of 12,662 feet, Borah Peak is located in the Lost River Range. Since the standard route up Borah Peak starts at class 3 (meaning hands required) it is considered a great beginner route. Most opt to climb during the mid-summer months. However, it is certainly a true mountaineering challenge to tackle this peak during winter, fall or spring and many technical routes exist on the peak.

This climb may be short in mileage, but it makes up for it in elevation gain. In less than four miles the Chicken Out Ridge route climbs about 5,100 feet. Chicken Out ridge offers Class 3 and 4 scrambling. Be sure to have a solid understanding of route finding before attempting this peak. Just because you don’t need technical gear for the standard route, doesn’t mean it still isn’t a fun challenge. This peak gives those new to the world of mountaineering a robust physical challenge and a chance to reach a state’s high point. 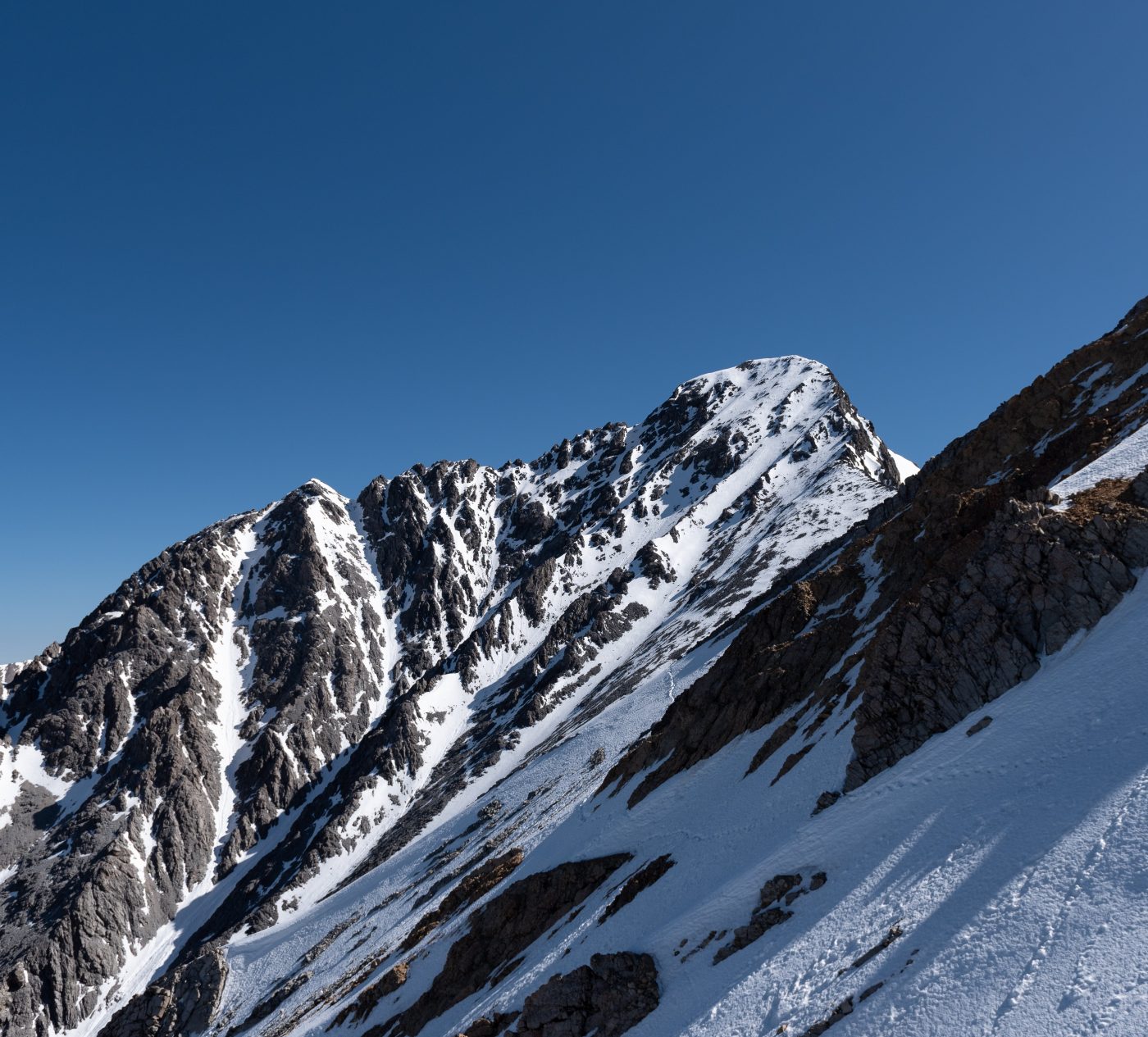