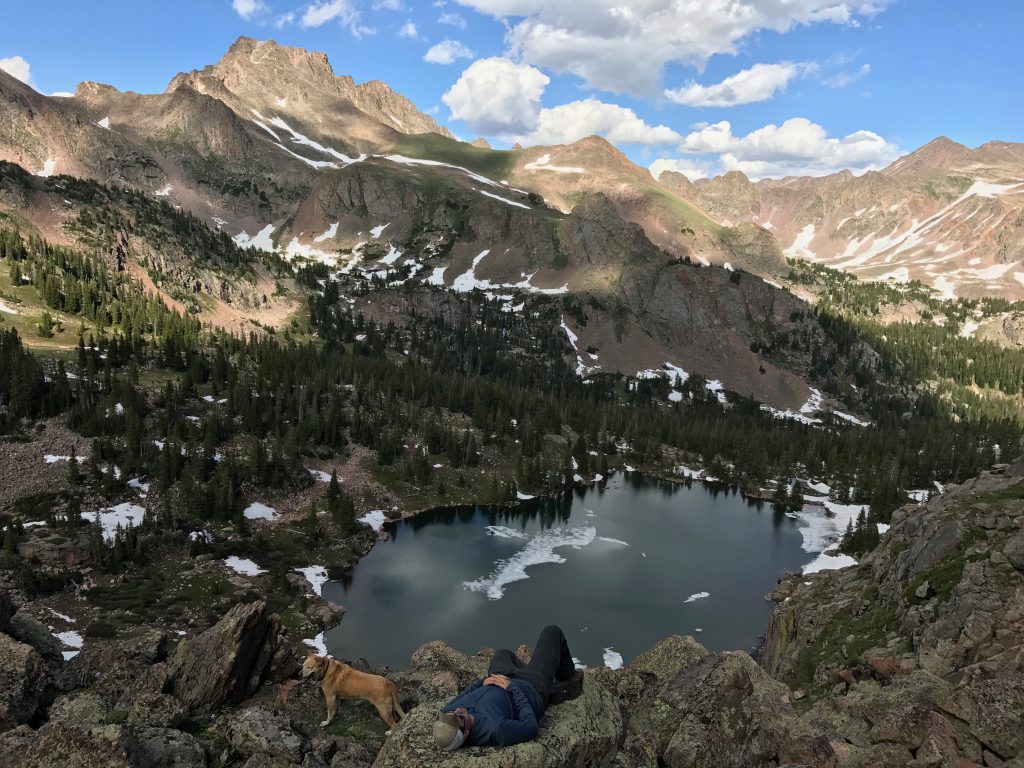 Everywhere I turn I’m surrounded by jagged peaks. The sawtooth ridges beckon with their snaggle-teeth jutting into the sky like a cartoon monster. The light casts perfect shadows in every direction. It’s as if I’m sitting on the inside of a cracked egg. The golden brown rock reflects its warm tones back at me. The air is crisp. Below me the waters of Gore lake shimmer and sparkle in the late afternoon sun. The high alpine lake’s blue sapphire waters contrast with the remaining chunks of ice. I lean into Squirrel. We’ve had an amazing three years, and I couldn’t think of a better place to celebrate our anniversary. 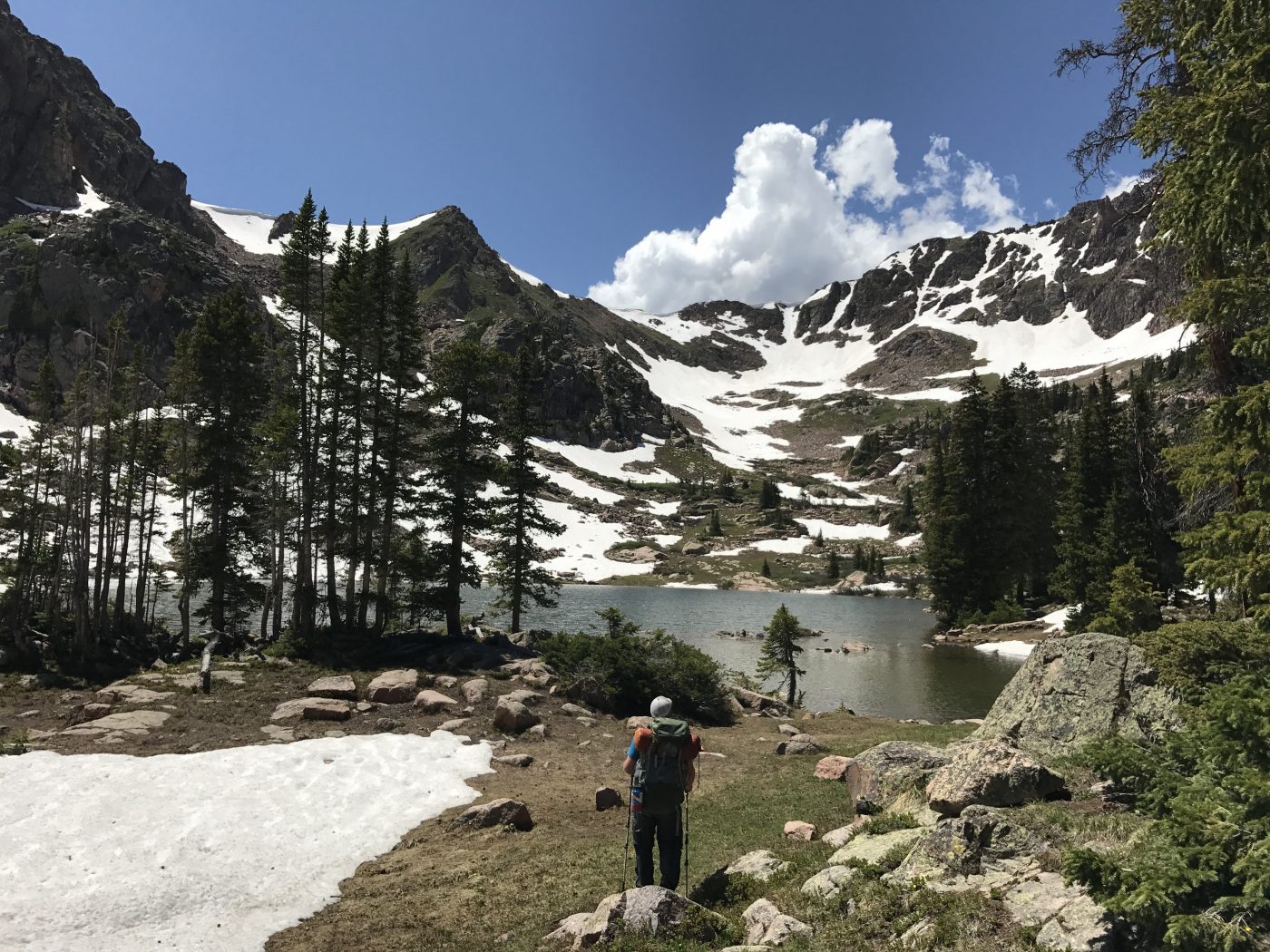 The Gore Range stretches along the boarder between Summit and Eagle counties with Gore Pass in the north and Tenmile Creek in the south. This rugged range’s striking peaks are complimented by the difficulty it takes to reach them. Access points are limited, trails are tough, and it takes a substantial amount of elevation gain to reach their commanding vistas.

The kicker: There isn’t a single peak in this range that makes the top 100 tallest mountains in Colorado. However, with plenty of serrated ridge lines and gravity defying rock, the drama of this range makes up for the lack of elevation. These peaks scream mountaineering playground, and I have been captivated with them since I first laid eyes on the range.

The Spirit of the Gores

One major draw of the Gores for many alpinists and backpacking enthusiasts is the lack of people. With no 14,000′ peaks, much of this range goes un-noticed by most people. And I have to admit, I like it that way. There’s a special kind of person that visits the Gores. The kind of person who doesn’t mind long approaches, excessive vertical, poorly marked trails and bushwhacking.

As far as Colorado goes, there is a lack of beta about the Gore Range, its routes, and its peaks. This is intentional and I plan on keeping it that way. The spirit of the Gores is to go and explore them for yourself. They are a place for experienced mountaineers, climbers and backpackers to put their skills to the test. Conducting a play-by-play simply destroys that spirit.

However, with that being said, the Gore Lake Trail is arguable the most popular and well-maintained trails in the range, so if you have what it takes to hike this difficult trail, then Gore Lake is a great introduction to the range. 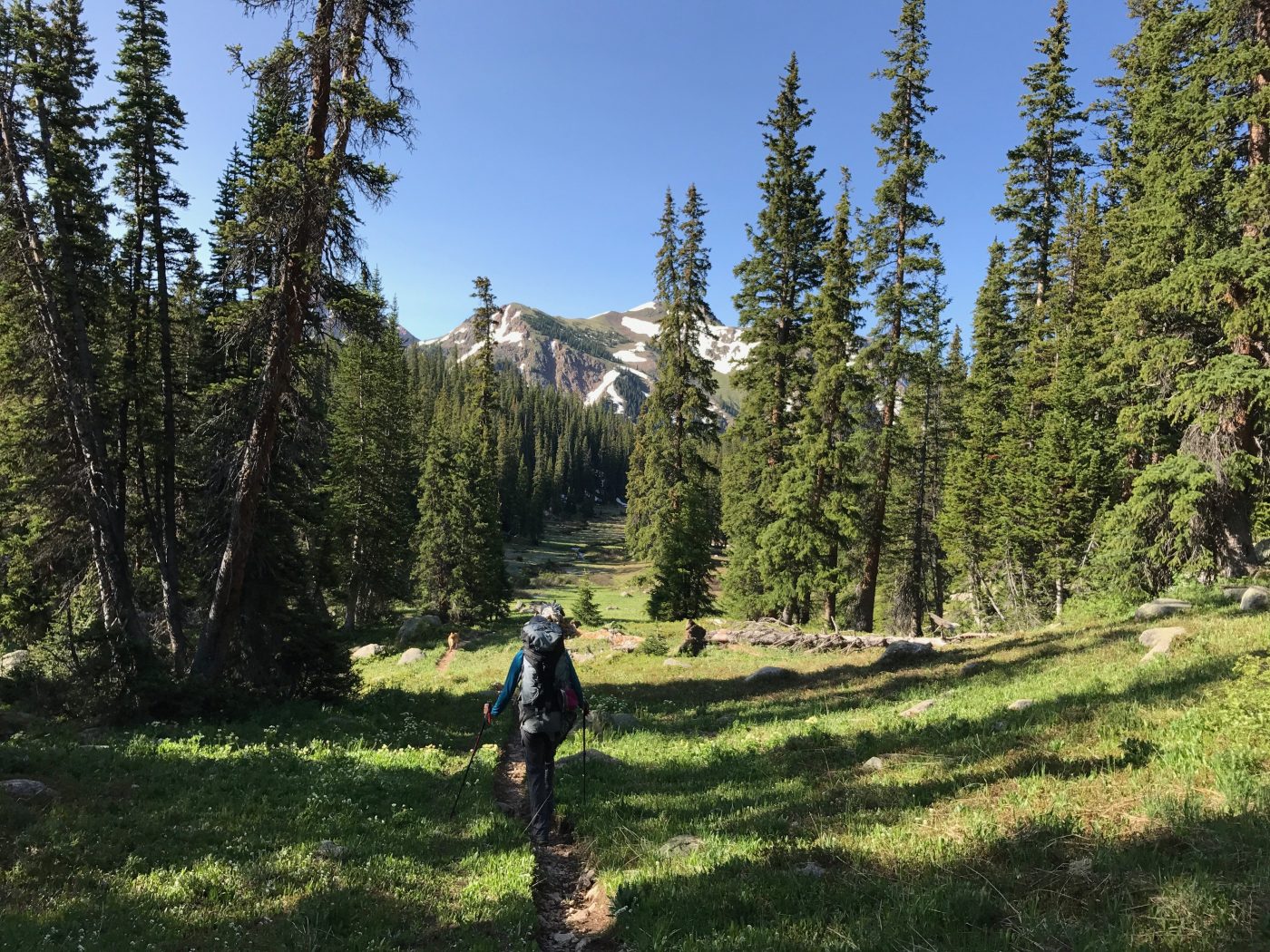 Get Your Backpacking Planner and Checklist!

The trail starts off like most do in the Gores, rather boring and uneventful. Surrounded by foothills, the destination seems far off. You meander around Gore Creek for the majority of the trail, until you reach the junction about four miles in with two prominently marked graves. We stopped here for some lunch, as we knew the next leg would be a struggle.

After snacking we started the grind. Surprised, I found the steep ascent to be relatively easy. I kept a good pace and felt great. Squirrel, on the other hand, experienced some trouble with altitude. However, all of the climbing quickly paid off as we passed through a few beautiful alpine valleys. The scenery gave Squirrel the mental boost he needed to reach the lake.

Arriving at the lake, I had to pinch myself. I couldn’t believe how stunning the alpine bowl was. Pictures don’t even do it justice. During the first week of July, much of the basin was still snowed in. We managed to find a spot about as far from the lake as the snow fields would allow.

Since we opted for an earlier start, we had the entire place to ourselves for the majority of the day. Trust me, I’ll be back early next summer to tackle some of the incredible snow climbs in this basin.

If you’re like me and you like to hike around where you end up, there are plenty of wonderful vistas along the ridge lines surrounding the lake. We circumnavigated most of the lake, gaining a rather steep ridge line. There are plenty of options to scramble and summit here, however most routes would require class 3 scrambling at a minimum. If scrambling isn’t your thing, there are plenty of high points that don’t require the use of your hands, granted everything is quite steep here.

I found this trail to be at the upper end of moderate, even with a loaded pack. However, since I’ve been training rigorously, my experience might be a little skewed. Unless you are the kind of person who works out multiple times a week and bags difficult peaks regularly, this is likely a difficult trail as rated on most hiking websites.

Approximately 12 miles out and back, or 6 miles to the lake. AllTrails puts this one at 11.5 miles, however some snowy patches of trail caused us to lose the trail at times, making the route a little longer.

2,975 feet. Although that may sound mellow over the course of 6 miles, it isn’t. Almost all of your gain happens in a short 1.5 mile section after the turnoff.

It took us about three and half hours to reach the lake and we stopped for lunch. The descent took around two and a half to three hours. Since there is so much to discover in the area, I’d highly recommend backpacking this one instead of day tripping it.

Here is the AllTrails.com Topo Map for the Gore Lake Trail.

This site uses Akismet to reduce spam. Learn how your comment data is processed.

Meg aka Fox is a 30-something true-born adventurer and enthusiastic storyteller. Exploration pulses through her veins. As an avid outdoors enthusiast and world traveler she's determined to discover the remote corners of the planet. She'd rather be dirty than done up.

Up Your Adventure Game with My Ebook!