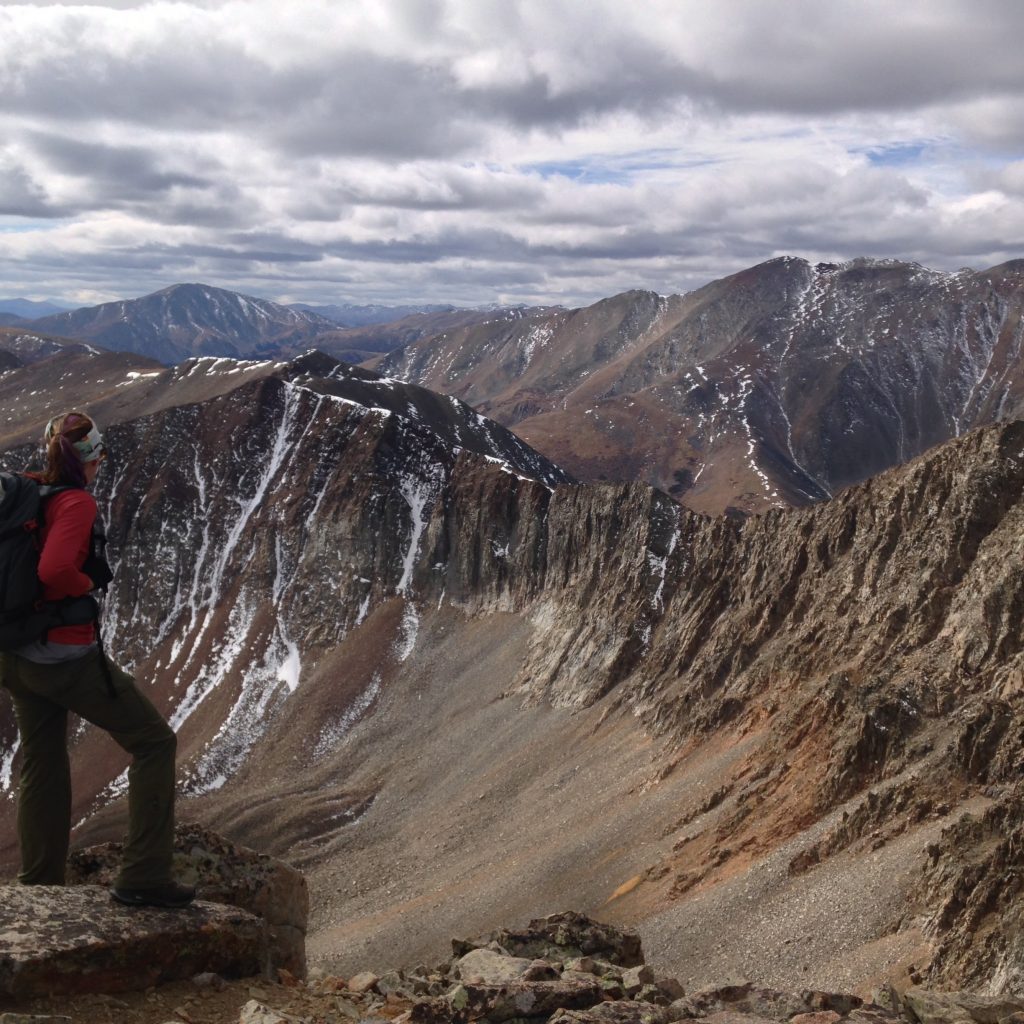 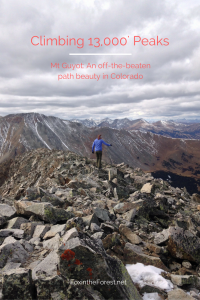 Wow guys, I’m 30! The last few weeks of my 20s were spent climbing mountains, climbing rocks, and exploring Colorado. Ever since Squirrel and I laid eyes on the beautiful Mt Guyot (13,376′) back in July when we backpacked Segment 6 of the Colorado Trail we knew she had to be climbed. Mt Guyot form Michigan Creek is an excellent climb for anyone looking to get spectacular views, but doesn’t have the time to take on a full-fledged 13er hike. 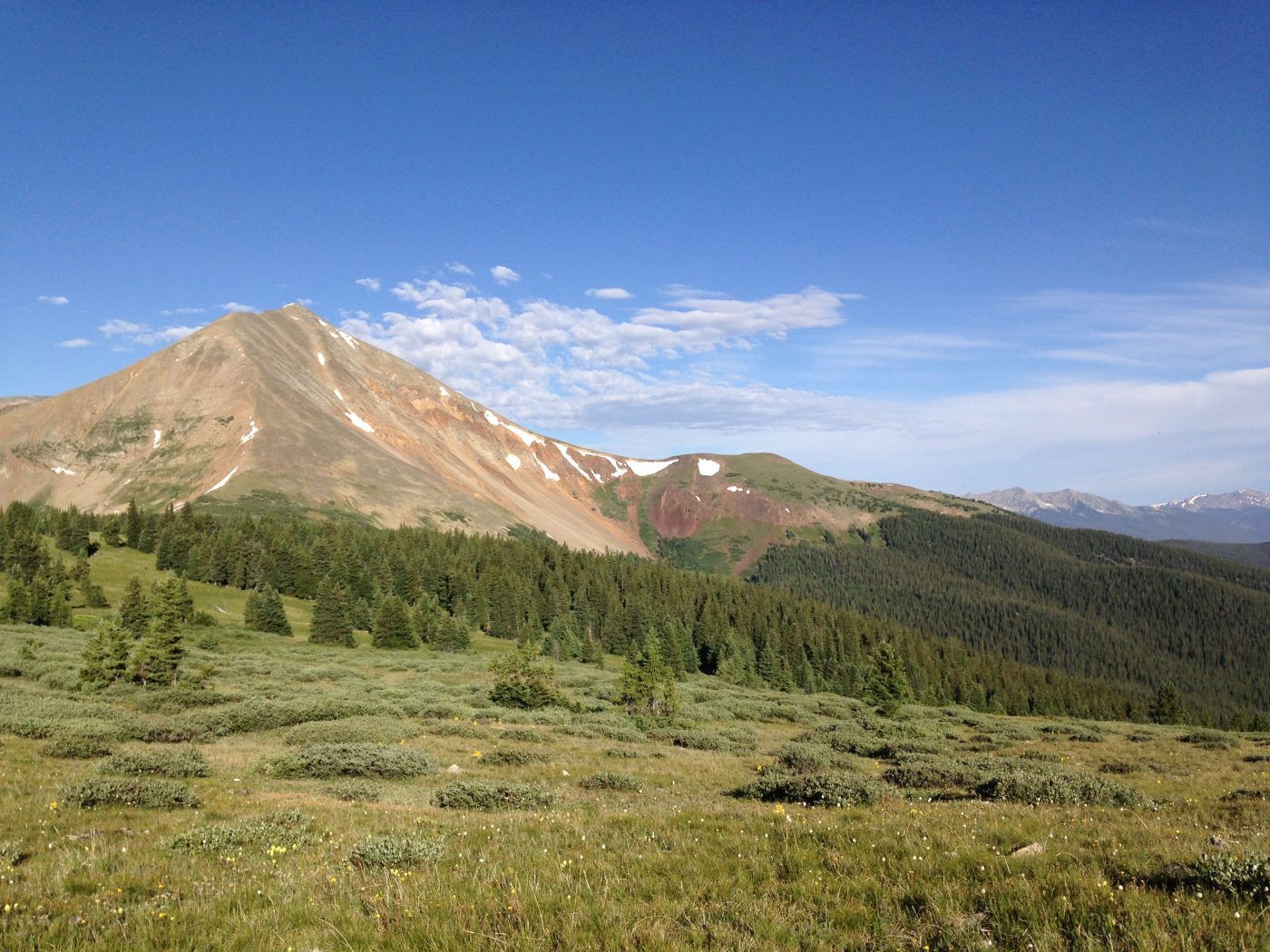 There’s an easy way and a hard way up Guyot. We decided to take the challenging route up the east ridge. Class 2+ gaining 1,800′ in a little more than a mile. Nothing quite says leg burn like a steep uphill rock scramble.

Squirrel, Nina and I headed up Michigan Creek Road with our packs on a windy Sunday summit bound. The road stops at the top of Georgia Pass, near Breckenridge, CO. We arrived at the base of the mountain a little after 11am. It’s nice hiking this time of year – you typically don’t have to worry about bad weather, so you can start a bit later. Another reason for the late start is the complete lack of crowds. All three times we have explored this area there hasn’t been another hiker in sight. 13ers typically don’t see the crowds that 14ers do. 13ers without a trail up to the summit see even less of a crowd. 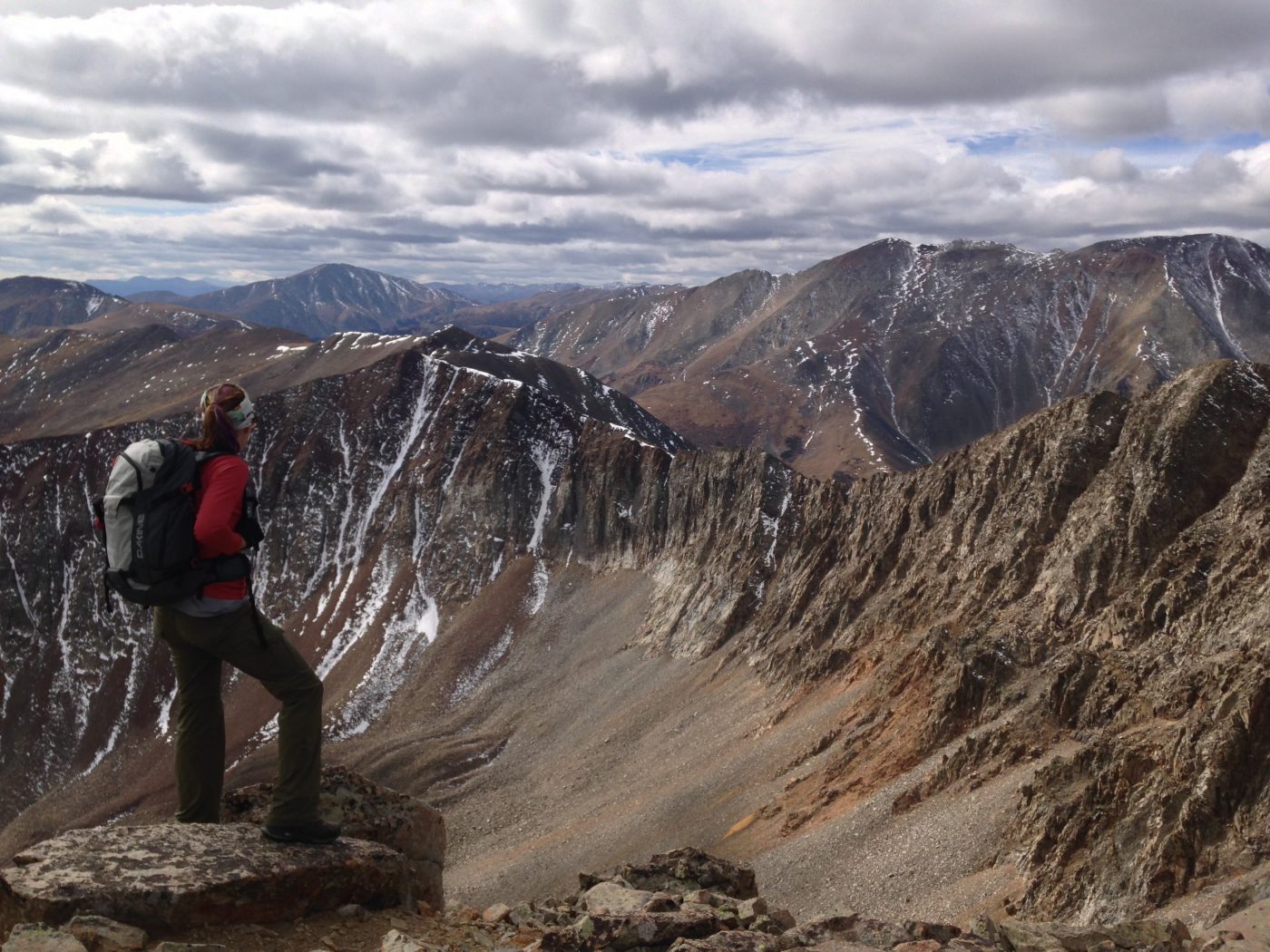 We chattered about this and that, but once we hit the rock we quickly got quiet. Nina was struggling as well. The boulders were big enough for her to scamper, but not big enough to provide her with stable footing. After watching her slip and gut the rocks and get legs caught in the gaps between rocks it became apparent that this was extremely dangerous for her. She sensed it too and started to head down. Squirrel and I gave each other a glance and decided that it wasn’t worth the risk for her and turned around. 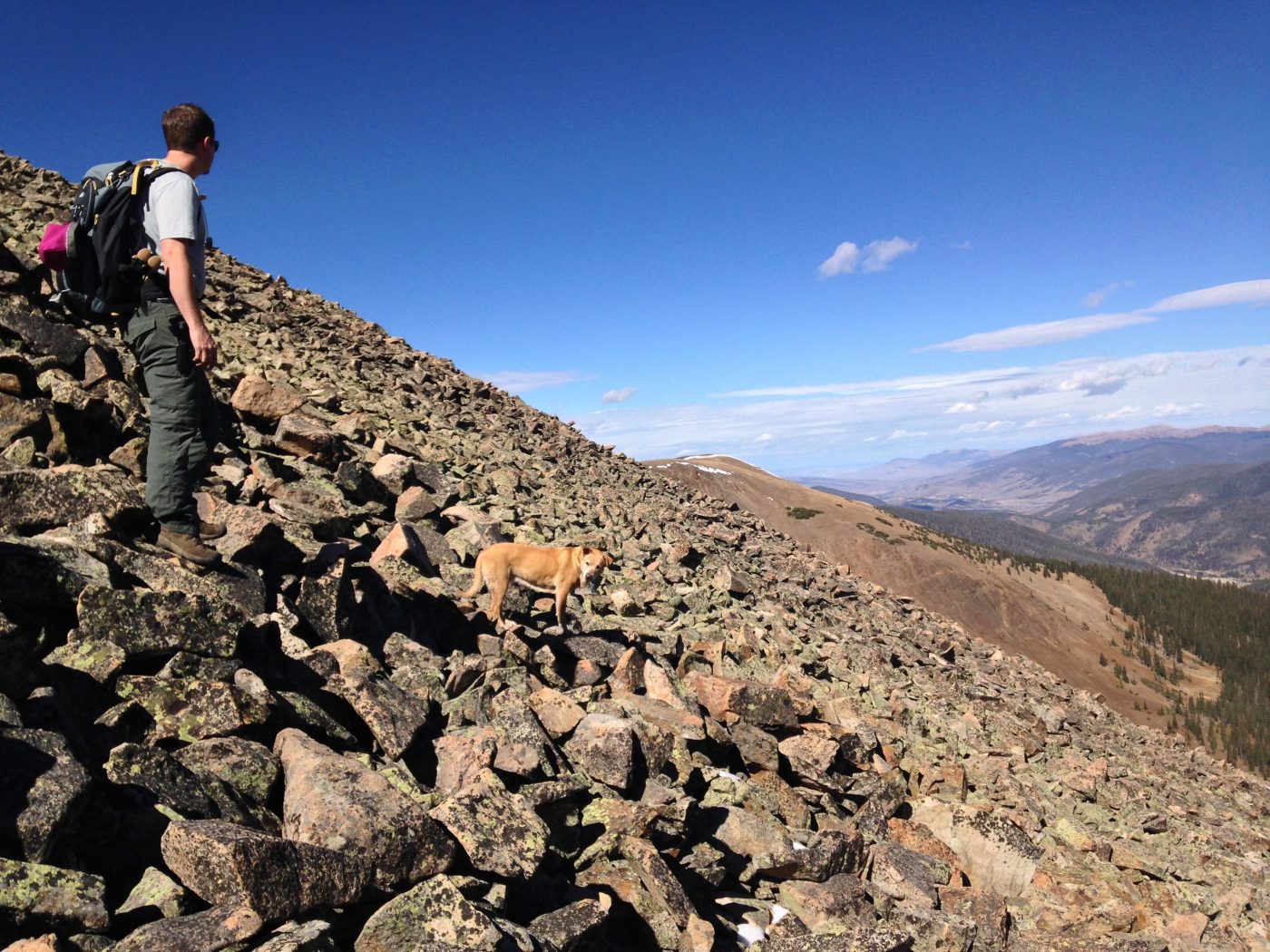 Fortunately, the weather held out on us and we were able to make another attempt, without the dog a couple of weeks later. A couple of friends and the two of us packed into Squirrel’s truck and headed up the road.

My first official summit attempt without a trail. Climbs like this present a new set of challenges. Instead of following a trail you need to watch where you are in relation to the mountain. Attack a ridge too low and you’ll end up in dangerous sliding talous field, too high and you could slip and fall down a steep couloir. Safety is the most important element in being in these environments. You not only have to prepare physically, but mentally as well. 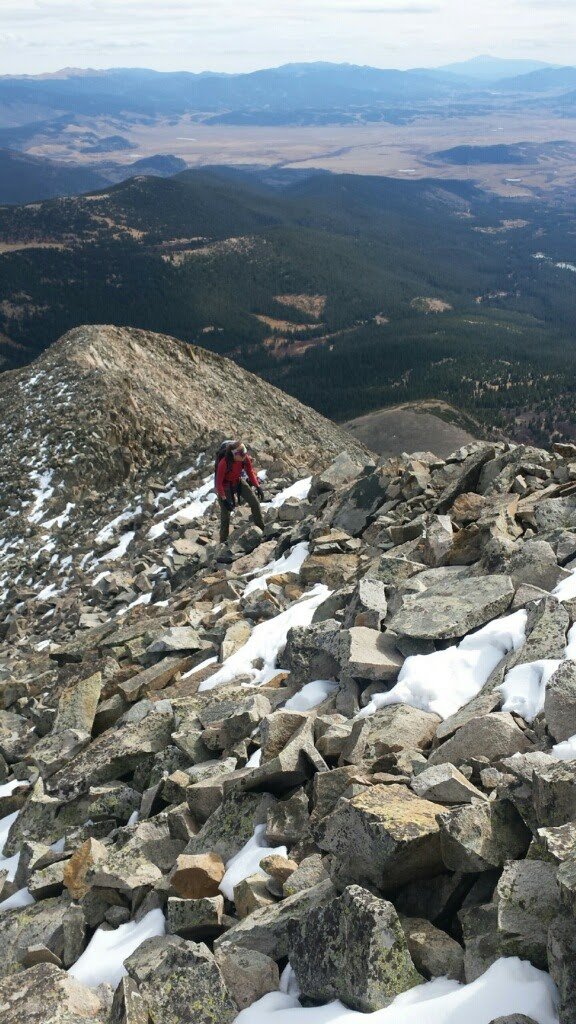 Get Your Free Hiking Gear List and Hiking Planner!

I find such bliss in the mountains. Standing on the summit makes me so small and so large at the same time. As if I could do everything and be everywhere all at once. At the same time I am just a mere spec on the radar that you couldn’t see without a microscope. I feel more in touch with nature than I do doing anything else. Like I’m a part of a secret world that only let’s in those who work at it. Nothing quite describes it, and nothing quite captures it.

Getting to Mt Guyot via Georgia Pass

Getting there is easy. Simply follow the 285 to Jefferson, then Rd 35 until it turns to dirt. Stay straight at the fork to be on Rd 54. At mile 5.4 there is a sign on the left for Georgia Pass/Michigan Creek Rd. Head left and drive to the top of the pass. 4WD is recommended, although you should be able to make it to the top of the pass with some careful driving towards the end. A small SUV/crossover should be fine.

There is no trail here. Simply drive to the Continental Divide, park and walk towards the mountain. The east ridge is somewhat of a triangle shape. Stay within the triangle to the false summit. There are some semblances of mountain goat paths that can make the trek up a bit easier, but be careful as these paths can stop abruptly or quickly dive into terrain too steep for people to safely walk on.

Proceed carefully along the ridge. Don’t dip too low to the north or you’ll end up in some sketchy loose rock, stay too high and you could slip into one of the many couloirs or steep cliffs on the south side. This is where you start to get into Class 2+ territory with a few easy class 3 moves. The summit has a small wind break and a GPS marker.

The route is mainly Class 2+ and although it is short you are gaining a significant amount of elevation over a short distance. The face is sloped between 20-30 degrees the entire time. Expect to use your hands and watch where you place your feet. Remember – going down is just as dangerous. It’s easy to get off track and end up on some sketchy rock so pay attention and plan ahead.

Round Trip Time: It took us about 3 hours. We stopped and hung out for a bit on the false summit, and spent plenty of time relaxing at the top as we had the place to ourselves.

Road Conditions: Very good. One or two tricky spots, but no high clearance required. After you get off the highway it’s mostly dirt. Once you pass the houses this road is not maintained in the winter and would require a snowmobile for access.

Camping: Michigan Creek offers some excellent dispersed camping. There are some secret spots at the top of the pass and down about a mile on the Colorado Trail/Continental Divide Trail

Dog Friendly?: Dogs are allowed here, but I would not recommend bringing your dog on this climb. My dog loves to climb and she struggled a bit too much on this route. If you’d rather not climb the mountain this is a jumping off point for a few Jeep roads. You can always hike part of the Colorado and Continental Divide trails and be treated to some excellent mountain vistas.

Exposure: This route has minimal exposure if you avoid the ridge crest, but there is no place for shelter should bad weather roll in. Even the pass does not have much to offer in terms of shelter from the weather. Always check multiple weather sources and check with the National Weather Service prior to climbing a mountain.

For more tips on climbing mountains check out these tips.

This site uses Akismet to reduce spam. Learn how your comment data is processed.

Meg aka Fox is a 30-something true-born adventurer and enthusiastic storyteller. Exploration pulses through her veins. As an avid outdoors enthusiast and world traveler she's determined to discover the remote corners of the planet. She'd rather be dirty than done up.

Up Your Adventure Game with My Ebook!