Ever since I heard that elephants held funerals for their loved ones, I was hooked. These animals have intrigued me for years, so much so that the amount of clothing in my closet with elephant prints is borderline embarrassing. When I decided to return to South East Asia this past fall and Laos made the itinerary, I knew I had to find a way to connect with these creatures. After all, Laos is the Land of a Million Elephants. However, finding a truly-ethical elephant tour in Luang Prabang proved to be a bit more difficult than I thought.

What Makes an Elephant Tour Ethical?

Do Not Ride the Elephants

Simply put, if an elephant tour has a riding program it is not ethical. It turns out that these animals are not only meant to be ridden (they have surprisingly fragile backs for such large creatures), but the way in which they are trained is deplorable. Sharp sticks, beatings, and ripping a young elephant from its mother are some of the many ways in which an elephant goes through training or crush. Many times these creatures are captured in the wild. Although bareback riding is considered better than the dreaded chair, where two people sit on a wooden chair strapped to an elephant’s back, elephants still aren’t meant to be ridden. 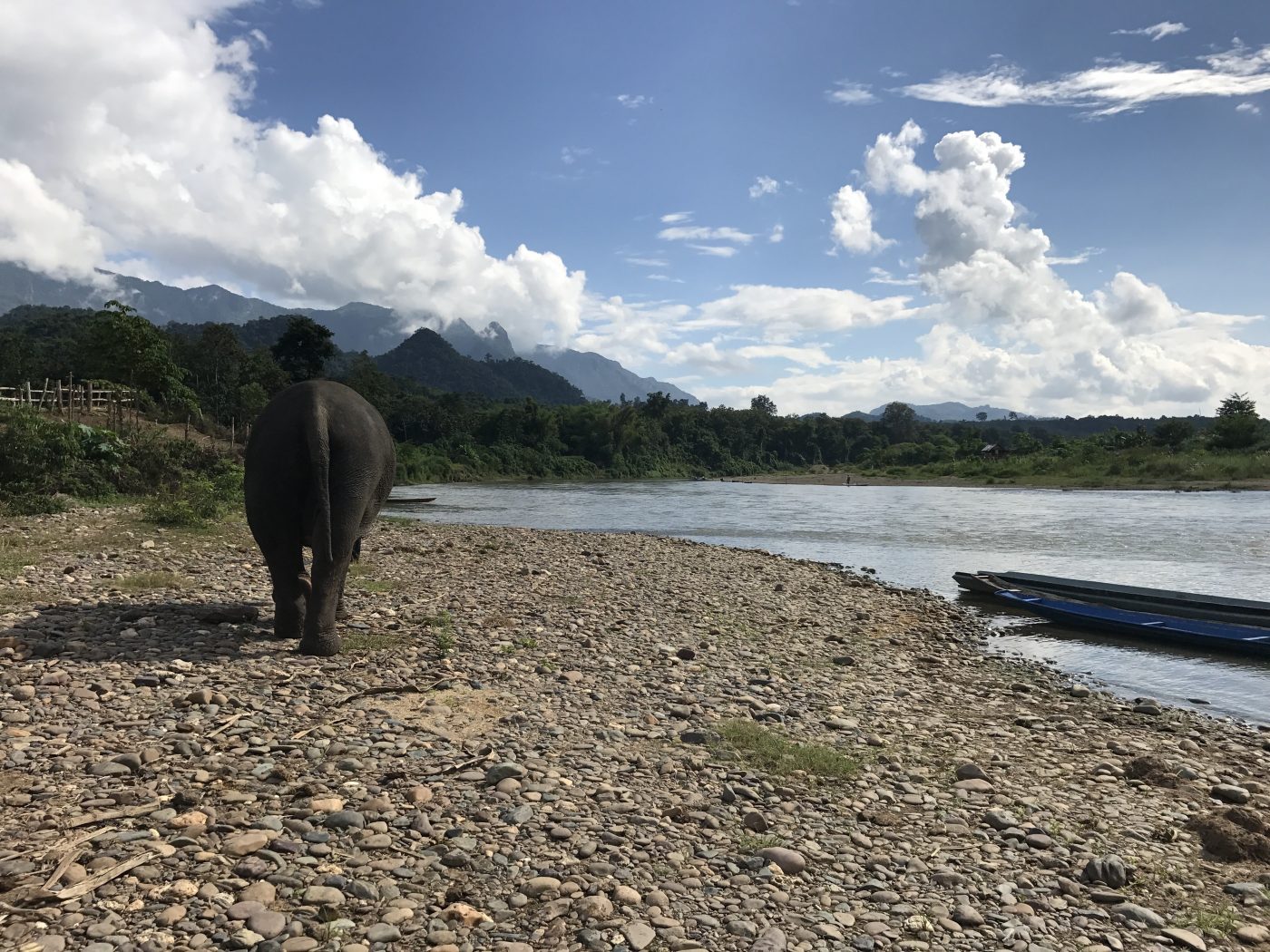 Mahouts Shouldn’t use Sticks or Chains

It is traditional for a mahout to carry a Goad or stick with a sharp metal hook at the end of it which they use to smack, poke and stab the elephant in the head or the mouth or inner ear in order to get the elephant to obey the mahout’s command. This is a huge red flag that the establishment does not treat the animal well.

Chains are another obvious sign. Elephants are large animals that require a lot of space to roam. They shouldn’t be chained, caged, or corralled for any reason.

Due to the treatment mentioned above, elephants shouldn’t be performing tricks like painting, standing up on two legs, or allowing you to surf on them. If so, chances are they were beaten into doing so on command. 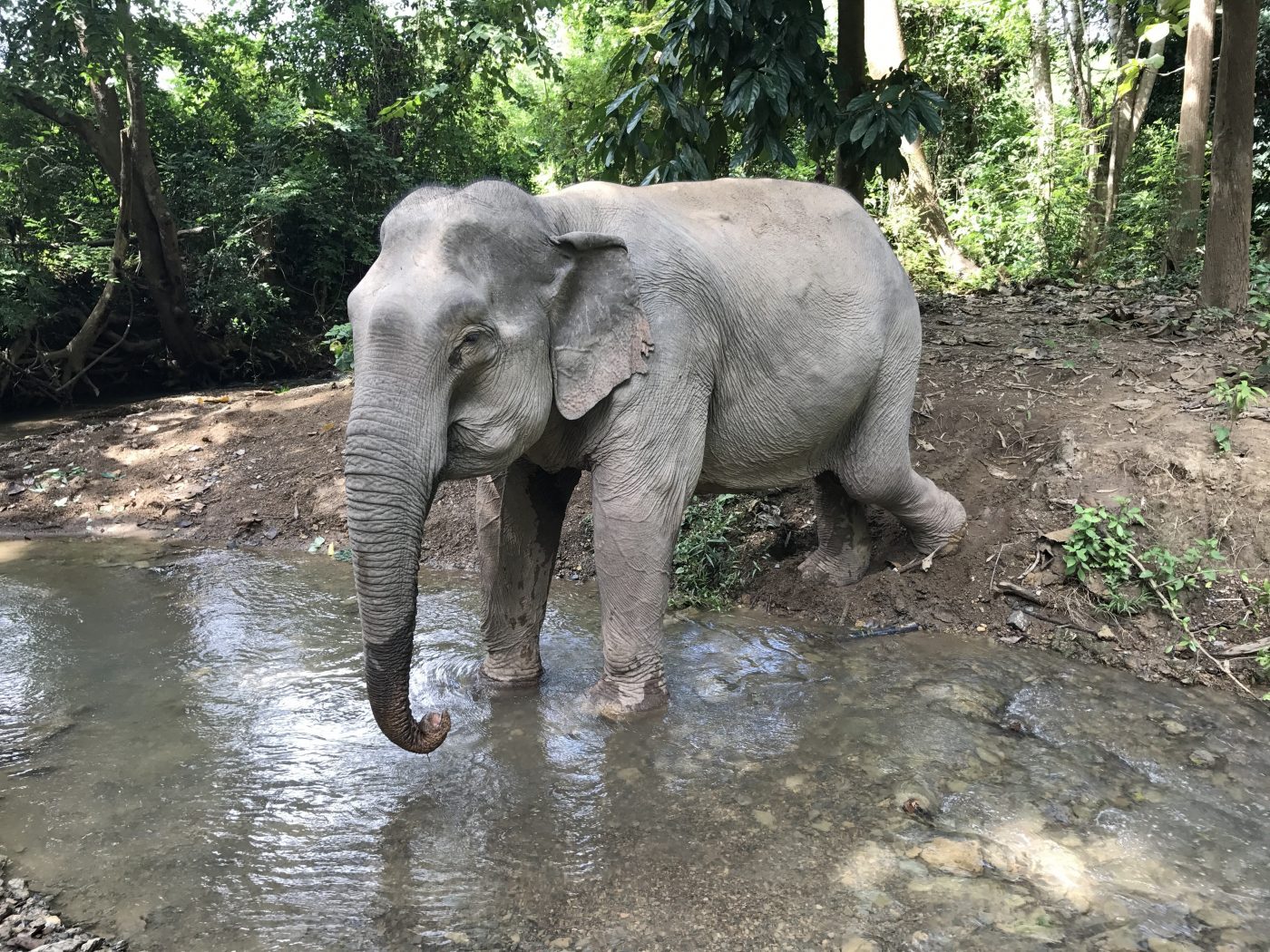 Elephants are highly emotional creatures, just like you and me. When they are asked to perform hard labor or difficult tasks it puts stress on an animal that should be wild. Their owners often underfeed them, or elephants lose their appetite entirely. When this happens, they cannot breed, as the gestation period for an elephant is 18 to 22 months. Babies that are born are often sick and disfigured. Over time, this causes a severe population decline.

This is exactly what is happening in Laos. Once known as the Land of a Million Elephants, the population as of 2017 is hovering over just about 1,300 with positive numbers. Only 600-800 remain in the wild with less than 500 in captivity.

I was completely disheartened when I found out just how desperate the elephant situation in Laos had become. Essentially, every single company offers elephant rides. Then I came across Mandalao.

What is Different About Mandalao?

This company immediately stood out as different than the rest. The company is owned by Kellen Johnson, Roice Davis, and Michael Volger, three Laos-based Americans looking to make waves in elephant conservation. The western influence certainly shows on their well-designed website, but their passion for their project and dedication to local involvement is evident the moment you step on the property. 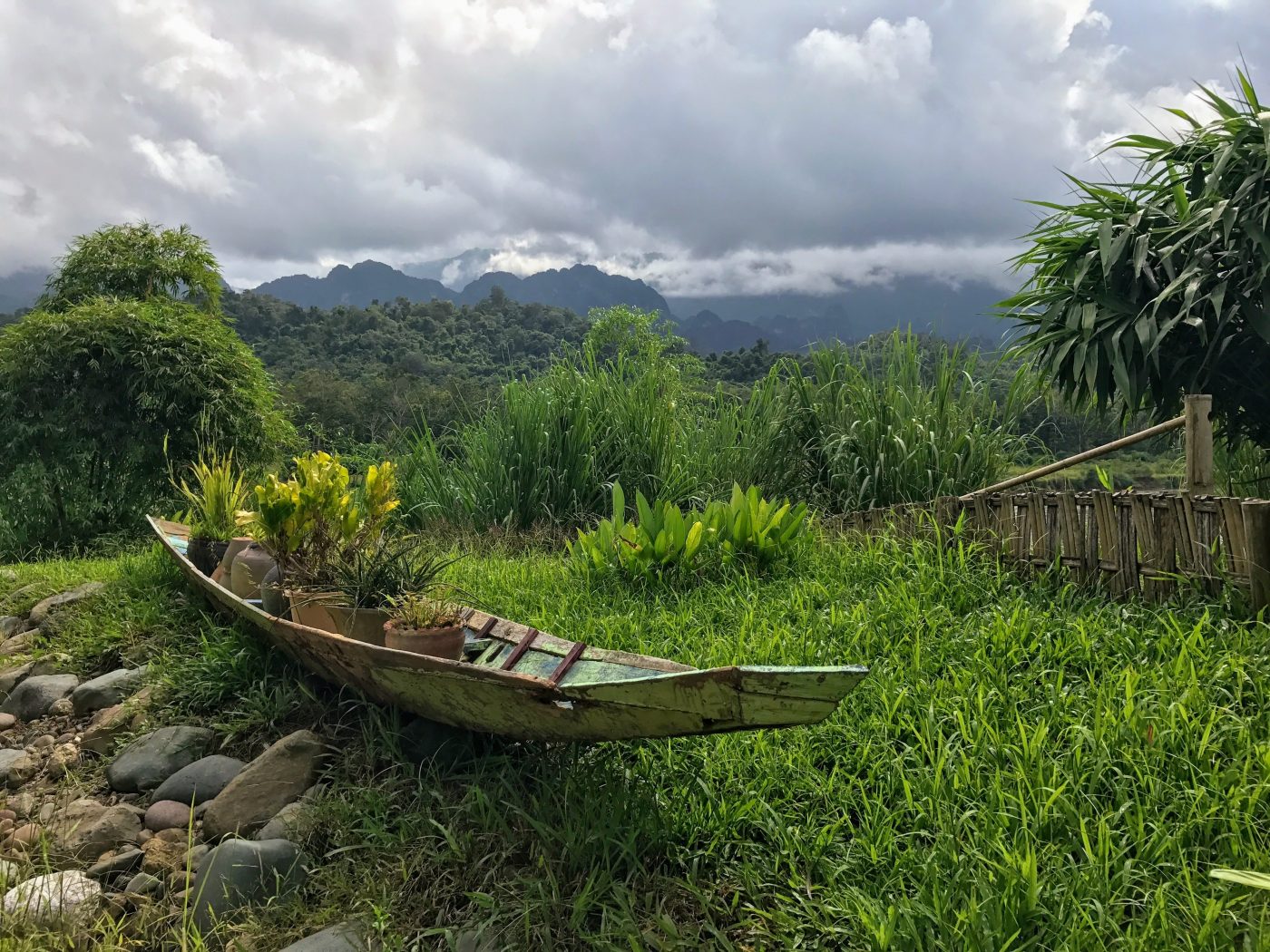 The property overlooks a stunning mountain valley. We climbed the first hill in the background (don’t worry, not the large mountains in the distance)

The only offerings on the menu at Mandalao are for walking-based tours only. As an avid hiker, clearly this place was meant for me. The opportunity to go on a hike with an elephant was simply too good for me to pass up. Mahouts walk next to the elephants, using voice commands and no tools to ensure that no one gets in each other’s way.

Your experience is well thought out. You hike up a large hill and meet the elephants along the trail. Meeting them in their natural environment puts both the visitor and creature at ease, and adds to the authenticity of the experience. After the meet and greet there is plenty of time for snacks, photos, and rest before you head back down the hill towards the river for bath time. 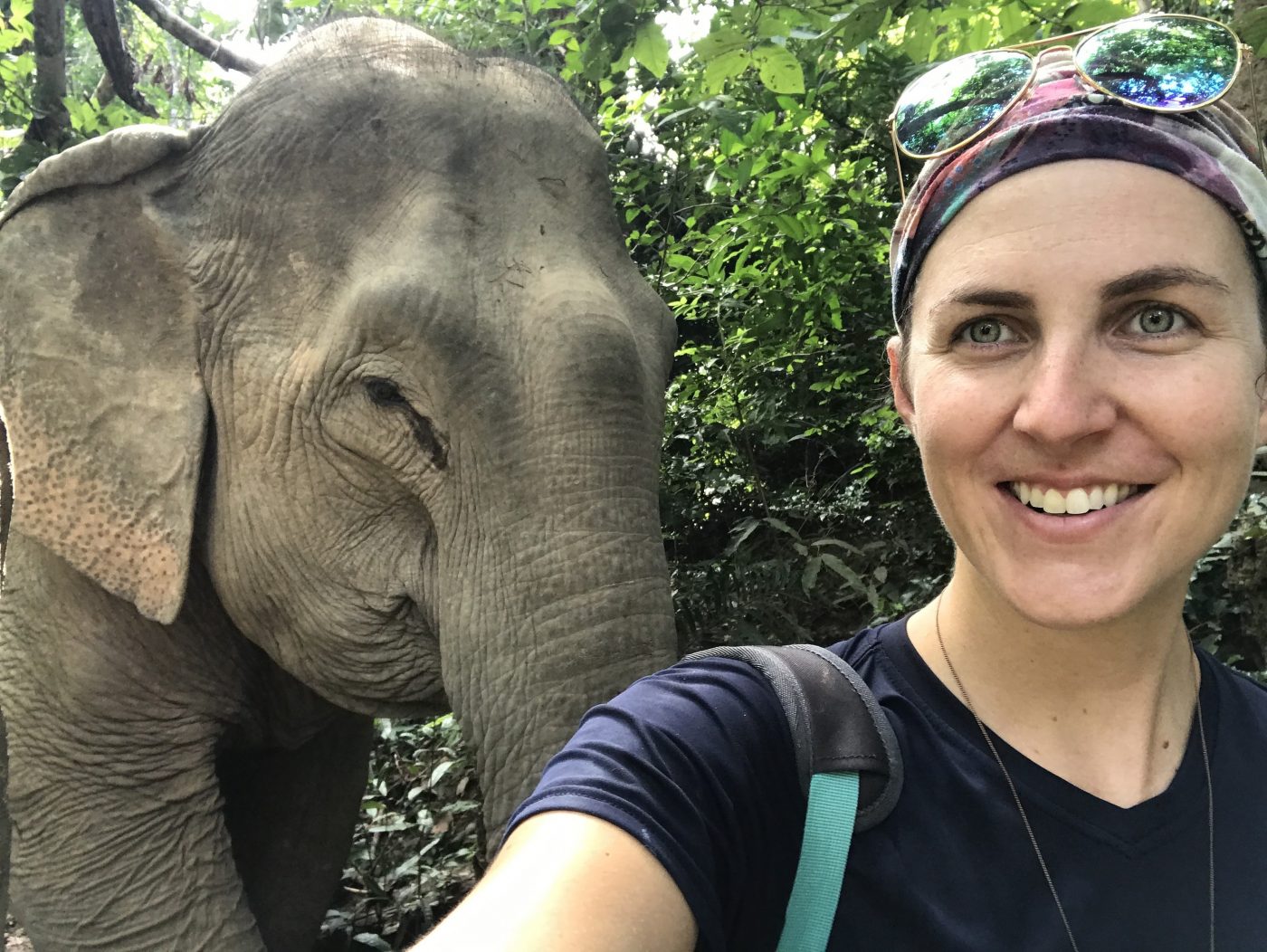 Having an elephant as a hiking partner is a magical experience.

The property is located outside of the town of Luang Prabang near a small village unnamed by Google Earth. This community is heavily involved in the goings on of Mandalao. The company leases over 30 hectares of land from both the village and the government. Local villagers are employed by Mandalao from tasks ranging from gardening to elephant caretaker. 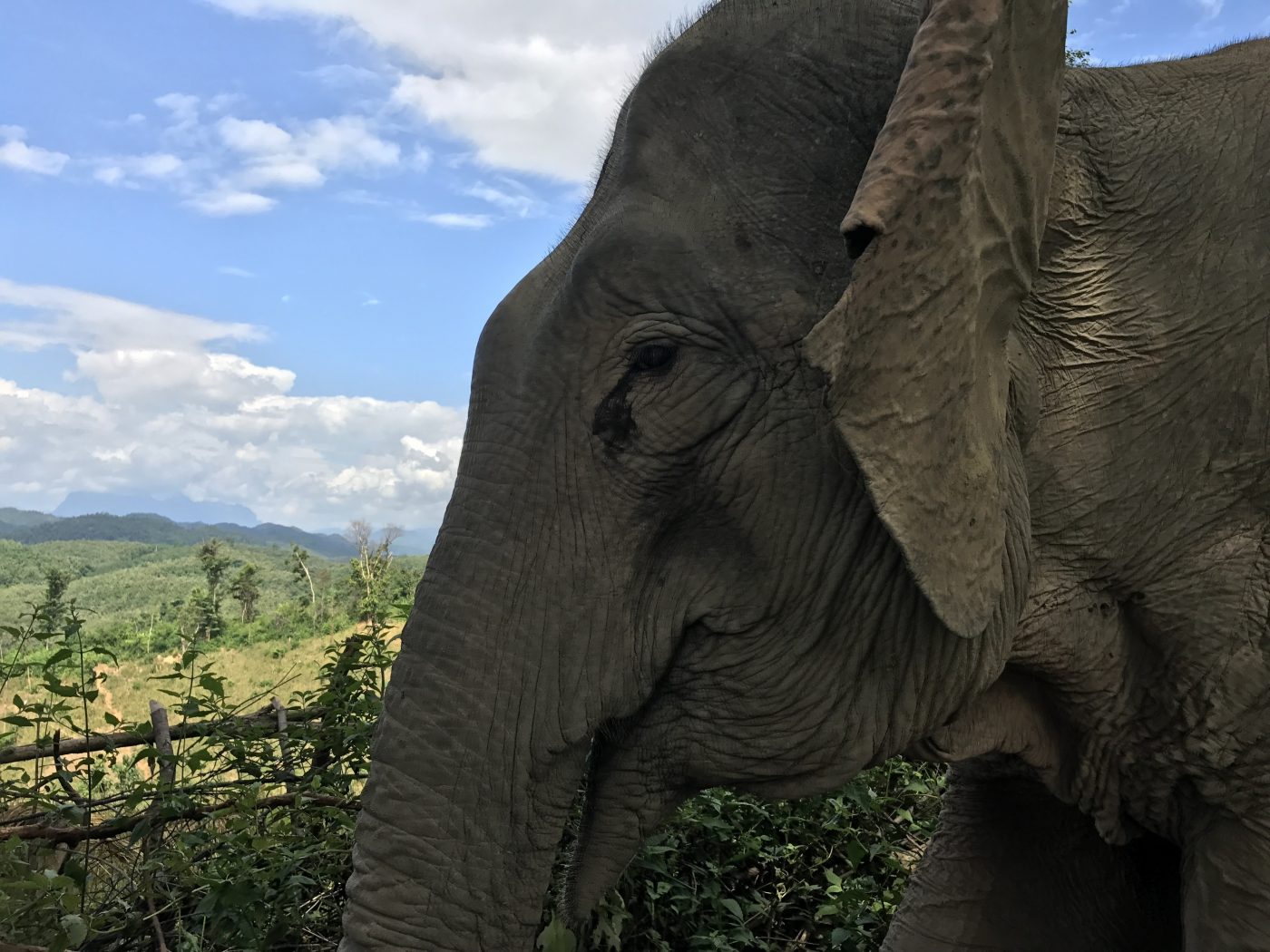 The ultimate goal of Mandalao is to re-introduce its elephants into the national parks. They aim to raise awareness about conservation both to tourists, as well as local communities. This was clearly evident while we were there. They have trained the rescued creatures to find their own food in the wild. Currently, roughly 50% of their diet comes from the jungle walks, evident by the many snack breaks we took while hiking with the elephants.

There are no pens or chains at Mandalao, the elephants are allowed to roam freely on the property and can search for food at their leisure. The only obvious exception to this rule is the age-old conflict between farmers and elephants. There are fences along farmers’ plots in order to keep the elephants away from the livelihood of the local farming community. 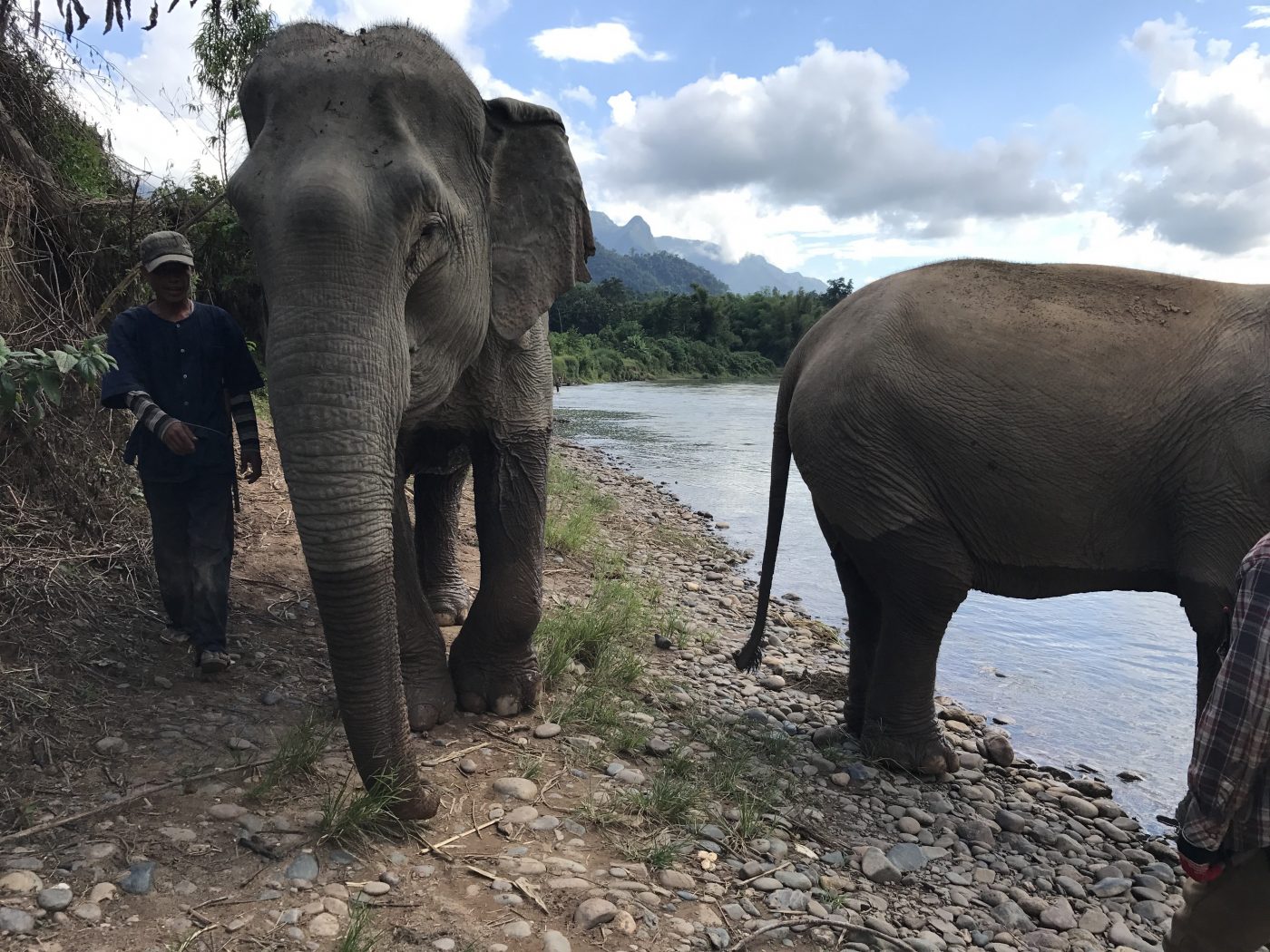 Group sizes for the tours of Mandalao are limited to six people and two elephants. The entire time I trekked with the elephants I never felt like they were overwhelmed by people, and I never felt like I needed to elbow my way in for more time.

At one point, an elephant and I got a bit ahead of the group and enjoyed some solo play time in the river. Both of us cooled off and relaxed in the small river. She seemed quite content and enjoyed her walk much the way a dog enjoys roaming the woods. If one of the elephants didn’t want any more social interaction, they simply walked away for some quiet time. 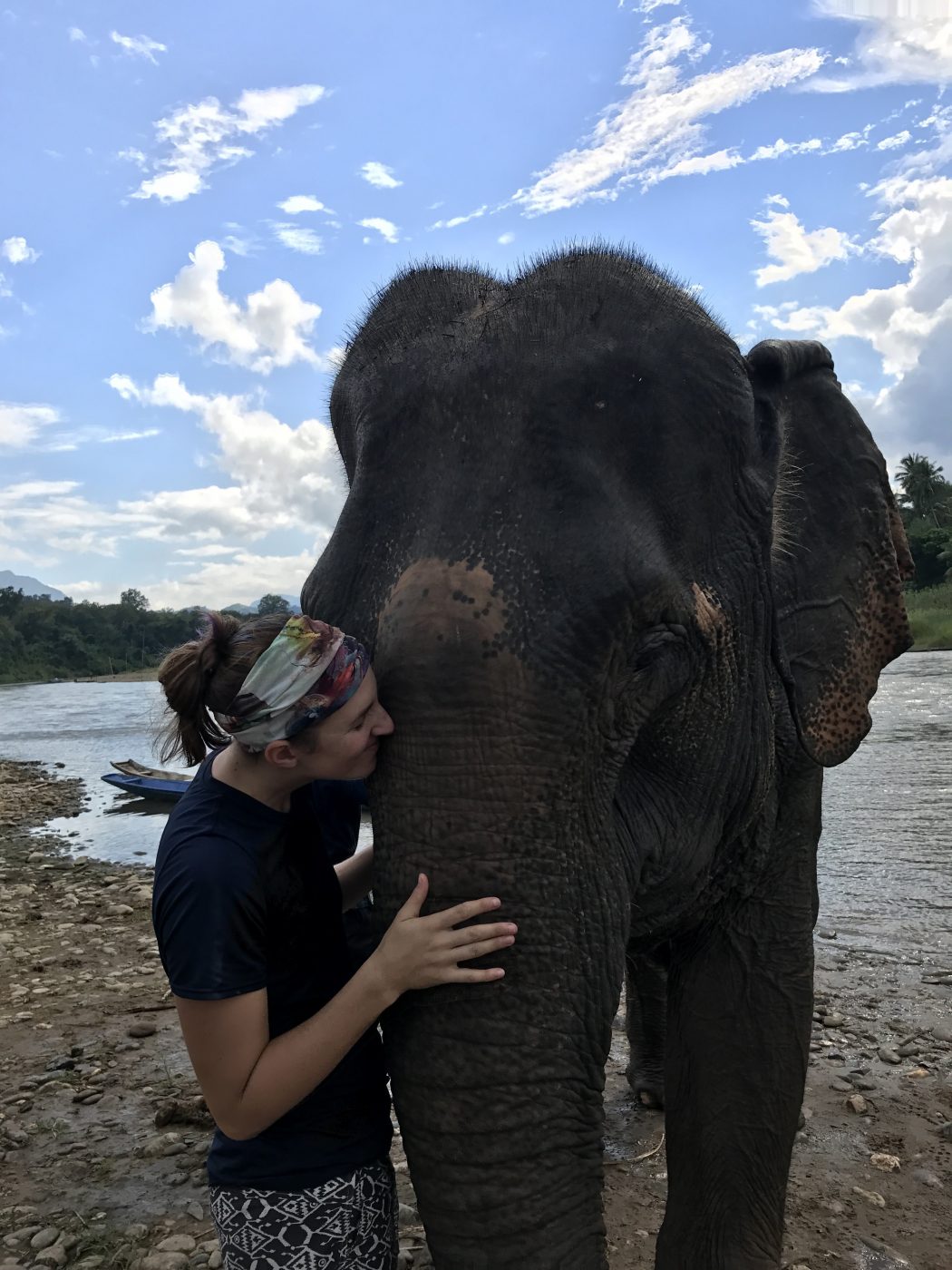 I’m at a loss to describe how it felt to spend time with these magnificent creatures. My hope is that one day she can be introduced back into the wild.

Where do the Elephants of Mandalao Come from?

Mandalao purchases their elephants from logging operations in Laos. They currently have seven female elephants plus one baby male elephant in their care. An elephant costs around $150,000 USD. These creatures are purchased on loan. The price of your experience goes directly to help with that payment and ultimately them from the horrid conditions they once endured. When they show up, they are often malnourished and traumatized. They do not know how to find food on their own and are often in a deep depression. 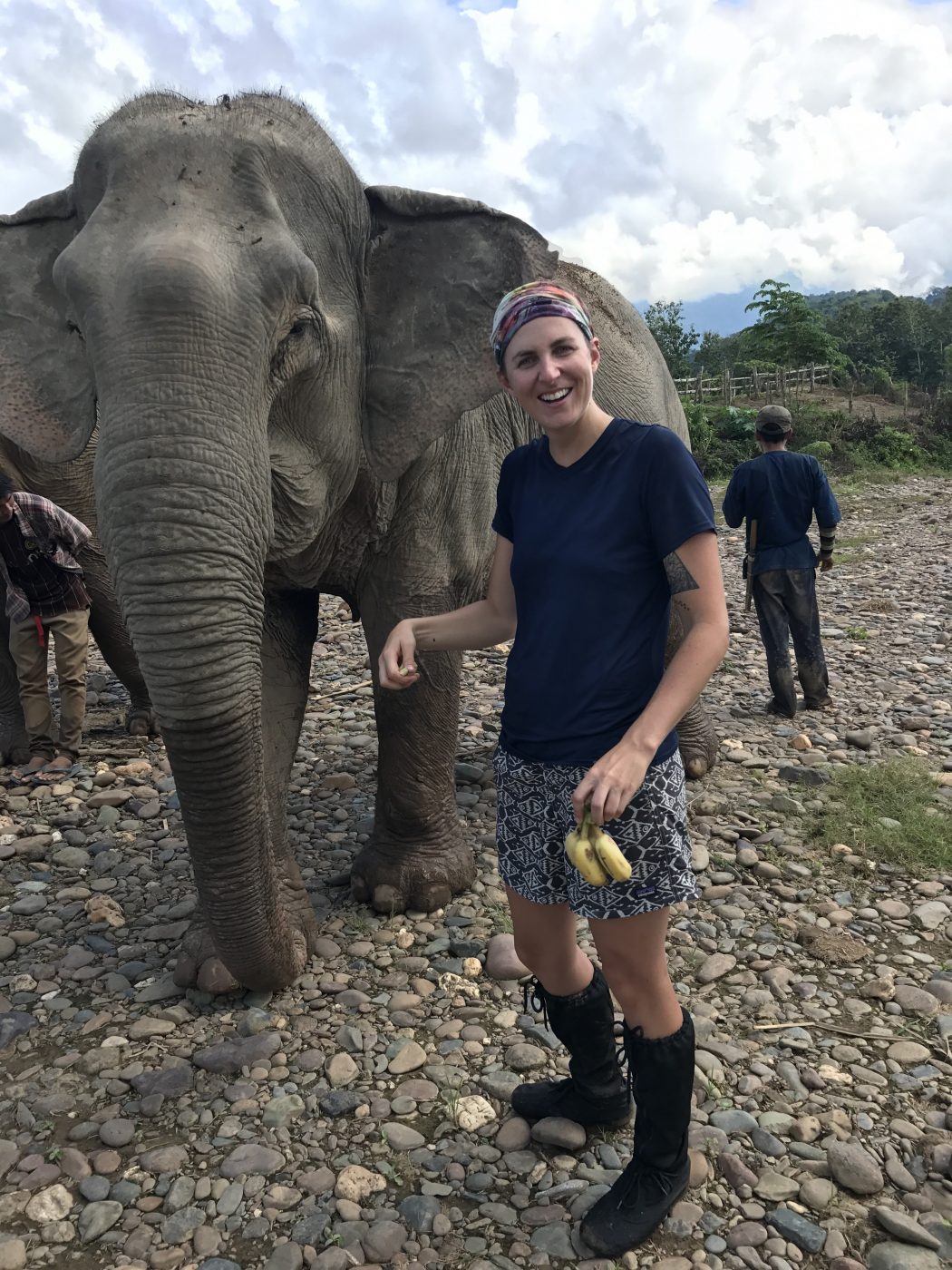 Really, she’s interested in my bananas, but hey, I’ll take it!

Mandalao offers them a second lease on life. Who wouldn’t want to spend their days wandering the beautiful jungle, munching on trees, enjoying bunches of banana treats, and bathing by the river?

At only two years old, Mandalao is doing phenomenal things for these creatures. Expect to see this place flourish as it begins to grow and establish itself. If you ever find yourself in Luang Prabang, Laos, stop by and hike with the elephants of Mandalao.

NOTE: This post is not sponsored in any way. I received no special treatment or a discount for writing this content. All opinions are my own.

Traveling to Laos? Check out my other posts on this amazing country